Things You Thought You Knew - Getting Windows Version

How to tell the "real" version of Windows your app is running on?

There are many reasons why a developer would need to know the version of the operating system that their app is running on. But, since about the time of Windows 8.1, Microsoft has decided that developers are not supposed to know the version of Windows that their software runs on, and deprecated the APIs that were previously used for it, such as GetVersion, GetVersionEx, VerifyVersionInfo and others. So now those APIs simply lie about the version of the OS and are pretty much useless.

This game of cat-and-mouse, that Microsoft plays with their developers about determining the version of the operating system, really puzzles me. Especially when there are so many ways to circumvent their restrictions and get a true version of the OS by using many hacks, such as: a version number from some system DLL, a presence of a certain API, or even by scanning the system registry. Unfortunately though, this silly game only introduces complexity and propensity for a buggy software.

If you ask about this online, I'm sure many people on some popular programming forums would find a reason to ask you back, "Why do you need to know this", instead of answering the question. So I won't follow that annoying practice, and show you how to do it without wasting too much of your time.

There are two ways how you can get the OS version. Let's review them both.

If you want to restrict or add certain functions to your app, depending on which OS it runs on, the easiest way to make that decision is by getting the version numbers of the operating system.

An interesting side note worth to mention here, is that Microsoft plays the faux-version game with user-mode developers only. For the kernel mode it is quite critical to know which version of the OS your driver runs on, and thus, Microsoft is not engaging in the same shenanigans with the kernel developers.

Thus, by using the native APIs, which are a carbon copy of their kernel counterparts, you can circumvent the user-mode "true version" restriction.

The API to use to get the real OS version numbers is an undocumented RtlGetNtVersionNumbers. It is exported from ntdll.dll and was available as far back as Windows XP. It is declared as such:

All of its input parameters are optional, and you can pass a NULL if you don't need some value.

After that you can use this chart to determine which operating system your app is running on, using the version numbers returned by that function.

Note that the last parameter of the RtlGetNtVersionNumbers function, receives a bitmask of values. The upper 4 bits of it are reserved for the type of the OS build:

Thus, if you want to get the build number from the 3rd parameter, you need to clear out its highest 4 bits.

The RtlGetNtVersionNumbers function can be used by statically linking to ntdll.dll as such:

Or, you can dynamically link to it during runtime using the GetProcAddress API if you don't like using ntdll.lib for static linking:

The output from RtlGetNtVersionNumbers on my old Windows XP machine is:

Alternatively, you can use the following approach if you need to get a text representation of the OS version.

Getting Version As a String

Quite often though you may need to display the version of the operating system using a human-readable string. For instance, if you are implementing a bug reporting capability in your app and need to fill out the version of the OS in your report. Thus it may be easier to use a different internal API instead of parsing the integer output from the RtlGetNtVersionNumbers function, which can get quite complicated.

There are many publicly available methods of extracting a string name of the operating system. Unfortunately most of them are quire flawed in that they do not always work over time with new releases of Windows.

To remedy the situation I decided to see how Microsoft are doing it themselves. Thus I reverse-engineered their winver.exe app to see the details of their implementation: 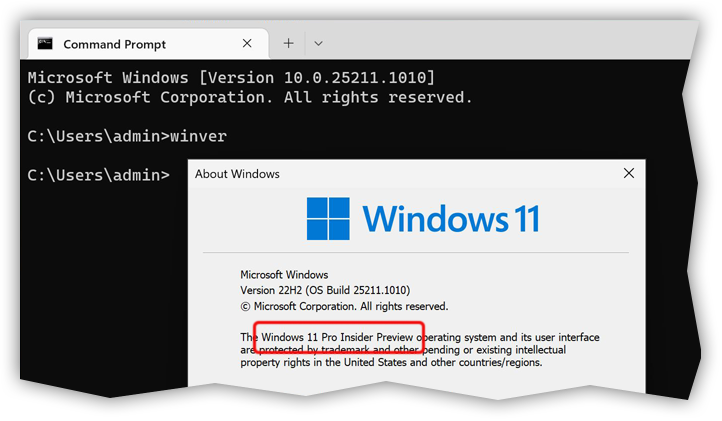 It turns out that their approach is quite simple. They use an undocumented module winbrand.dll that, among others, exports the BrandingFormatString function. It is declared as such:

This function was available for a long time, since Windows Vista.

On the input it receives a string that may contain formatting specifiers (akin to printf).

The return parameter is a string with the specifiers replaced with their actual values. The return value must be freed with a call to GlobalFree to avoid memory leaks. This function always seems to return a non-0 value, but it may be prudent to check it for a NULL.

The formatting specifiers available for this function are the following on my Windows 10 machine:

The output from these specifiers may be a localized string, depending on the language installed in the operating system.

Below is an example of the specifiers and their values on different (English) Windows systems that I observed:

The most interesting specifiers for our case are: %WINDOWS_LONG% and %WINDOWS_PRODUCT%.

Note the difference between the values of %WINDOWS_SHORT% and %WINDOWS_LONG% on Windows 10 and Windows 11. This doesn't help with the confusion, does it?

There's no .lib file for the winbrand.dll module available in the Windows SDK. And even Microsoft seem to be loading it during runtime in their winver.exe app. You can do it as such:

The code above outputs the following in my Windows 10 machine:

The operating system is: Windows 10 Pro

Which can be used for a debugging output in your event log file.

The approaches that I showed above have been used quite extensively by Microsoft themselves for quite some time now. But due to their undocumented nature the functions involved can be altered in the future without notice. So, if you use them, make sure to put necessary precautions and fallbacks to account for possibility of a change.