Things You Thought You Knew - The UPS Store

UPS vs The UPS Store - What you need to know before sending your packages.

I should admit that I felt very silly for not realizing this earlier. Let's see if you would fall for the same trap. Do you know that the "United Parcel Service", or UPS, is not the same thing as the "UPS Store"?

Both have the same logo and branding and you might have assumed that the UPS Store is just a brick-and-mortar storefront for UPS. Well, I won't blame you. Because I thought the same.

To give you the answer early, the latter one, or the UPS Store is the franchise of the UPS business. For you, this means that by using the UPS Store you will be paying a markup to the franchisee owner, and sometimes quite a hefty one.

Here's how I found out and my way to avoid paying a markup.

At about mid-December 2020 I needed to mail a small package abroad. I needed to send it to one of the countries where regular mail was not very reliable, so I had to use some private carrier. I chose UPS because I knew that the town I was in had the UPS Store nearby.

But before going to the UPS Store, I decided to make my research first and to see how much it would cost me by checking online at ups.com.

So having the price in mind, I went to the local brick-and-mortar UPS Store. After all, I still had a few questions about the international shipment that I wanted to ask them. Besides that, I also needed to buy a box to ship my package in.

The UPS Store Is Not UPS.com

While at the UPS Store I naively assumed that I would be quoted the same amount as I received at ups.com. So I started by saying that I already checked the prices online and I would like to ship my package after they answer my questions. I remember that a person at the counter gave me kinda strange look when I brought up "checking online" part. He then told me that he will check how much it would cost me.

To my surprise, the total that he looked up in his computer was more than double of what ups.com had quoted me. Moreover, there was only one option available. The quote from the UPS Store was $300-and-something, for the exact same package, sent to the exact same address.

Wow! At that point it took me a second to realize what was going on. Luckily, I was fast enough to see that I was not dealing with the UPS directly, and instead it was a reseller of their services, or a franchise. So I canceled my order just in time not to be charged, apologized and told them that I will try something else.

I don't know all the details of the UPS Store franchise, but it is now clear to me that they are an authorized reseller of the services provided by the UPS. What is not obvious though, is that by being a reseller, they are also free to add their own markup to the UPS prices. Which, in my case, was quote significant.

I remember that when I was taken aback by the guy's quote of more than double of what I saw at ups.com, he then added something to the effect of, "Well, our prices have gone up because of the holiday shipping."

Indeed it was the time for the Christmas shopping rush. And evidently what that allowed them to do was to more-than-double their markup on the UPS pricing. There was a long line at the UPS Store after all.

I need to say that I would obviously agree with a business adding a slight markup to goods (or even services) that they are selling, but charging more than double of the original amount? Seriously, UPS Store?!

You know, actually before I got the shipping quote, I asked them to sell me a sturdy cardboard box. The box that I was sending was somewhat small, and not very study. So I decided to protect it with an outer box. So again, remember the package was: 7-1/2" by 5-1/2" by 1-1/2". Guess what size box the person sold me at the UPS Store?

It was all unfolded into a flat configuration, with the UPS branding on it, and unfortunately, I didn't catch the size of that box right away. It is only when I got home that I realized that the box they sold me for that small package that I needed to send was: 12" by 12" by 6-1/2". 🤣 I guess shipping a box of that dimensions would also add up in price, hah? Oh, and it also cost me $7.25 for that empty box.

"Good job", UPS Store! Such a service is definitely worth your markup.

PS. Since I bought that empty box with the UPS Store branding, I thought, why not use it? So I took a picture of it and made a banner for this blog post. At least I can get some value out of my $7.25 purchase.

Since you have read this far, you may ask, "Well, what options do we have if we need to send stuff via UPS?" Good question. Indeed, I'm not saying anything bad about the UPS brand itself. In the most part they provide a very decent service.

The following though, is my advice how you can bypass any middlemen that may try to overcharge or price gouge you, especially during the holiday season:

I need to say that this applies to United States only. I haven't tried it in other countries. So in your area, the services may very.

And that's it. You don't need to deal with any resellers that will try to gouge you during a rush season. You can mail your UPS package right from the safety of your home!

The commercial invoice is the primary documentation used for import control, valuation and duty determination when shipping internationally. It is required for all international shipments, except documents of no commercial value. Recognized worldwide, the commercial invoice contains a significant amount of key information about your shipment such as: who it’s from, where it’s going, what it is, how many there are, what it’s used for, what it’s made from and its value.

You can get more information by searching online, or directly from the UPS website. Additionally, here is the UPS invoice in the PDF form.

Finally, after you fill out and print your commercial invoice, attach it to the package using a clear packing sleeve or a packing tape. If you're using the latter, use the tape to attach the invoice on all four corners.

Here's how the package looked like after I printed the label: 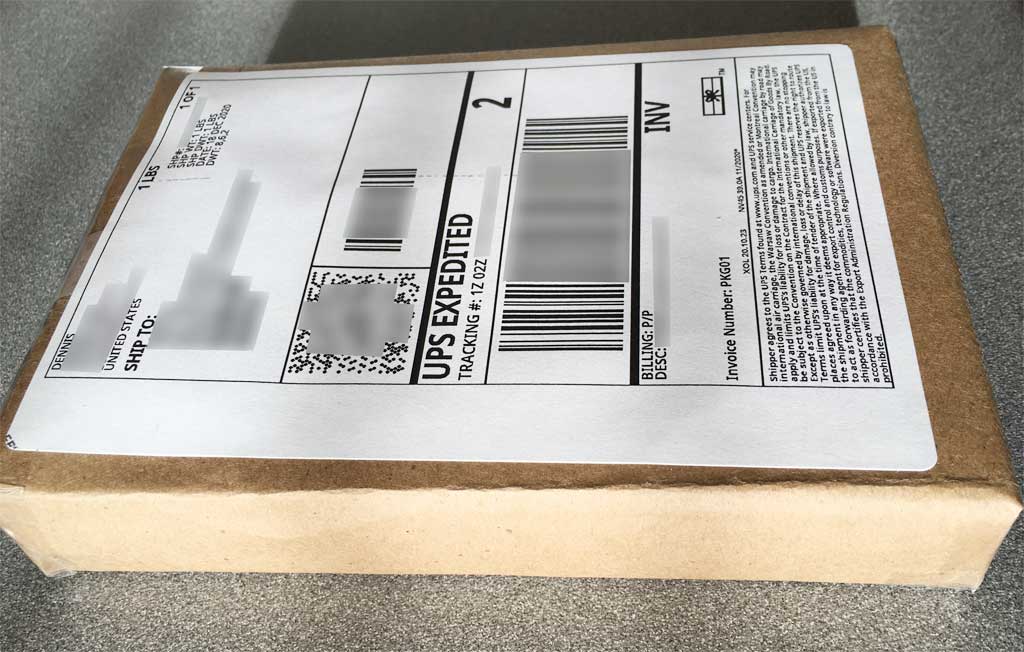 I cut up and used a grocery paper bag to wrap the original box in. The commercial invoice was attached to the back.