How to indefinitely delay installation of updates on Windows 10 Pro.

Let's face it. Everyone had some issues with updates in the past. They either start downloading when you're in the middle of something, or they decide to install at night when you left half of your documents open. There's always something when you leave it up to automatic scheduling!

So trying to resolve this pesky annoyance quite a lot of people resort to some drastic measures. They either completely disable updates, or download and install some third-party software that plays various tricks with the Windows update services. In my view, neither of those solutions are ideal.

Disabling updates altogether is a terrible idea, as updates quite often contain bug & security fixes that protect you from malware. And installing some third-party software to control critical infrastructure of the operating system is not something I would want to do either.

The solution in this case is quite simple and, better still, it is provided and supported by Microsoft - delay installation of updates indefinitely. This is something that has been in Windows 10 Pro since day one. And it is also something that Microsoft don't really want you to know about.

The solution is called Group Policy Objects (or GPOs for short). These things are primarily designed for enterprise users to control their machines from a single location. And their main goal is to impose various (security) restrictions on Windows workstations that are connected to their corporate network.

But what many people don't realize is that those same GPOs are also available on your standalone machine, but albeit in a different manner.

So the idea is to use just two local GPOs to control installation of updates. (You can use more, if you want, but these two will do the minimum work needed.)

And that's it. These options are supported by Windows 10 Pro internally. They are used by enterprise sys-admins to control their workstations, and they will remain working in the future.

The following steps have to be performed only once:

(OK, you may have to repeat them after a major OS update, but so far I didn't have to do it.)

Now on, your Windows 10 Pro will not install updates, or reboot on its own.

What To Expect Next?

After you've rebooted your computer, Windows update service will now follow instructions from those two GPOs. When it detects an update it will still continue to nag you with one of these pop-ups:

But the main point is that it will not begin installing updates, or worse, reboot your computer in the middle of the night, etc. Just close that pop-up. To install those updates you will have to do it manually. Just like it used to work in Windows 7.

Additionally, you may notice that now on the update screen will have the following message:

*Some settings are managed by your organization 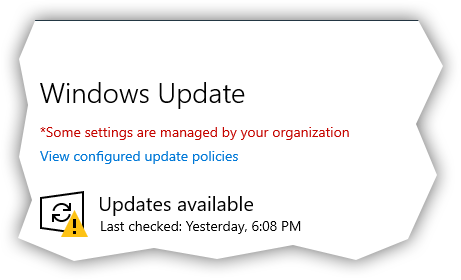 Don't worry, this is normal. There's no organization managing your computer. It's just Microsoft's way of saying that some settings are managed by the GPOs. They are probably showing this because you will not be able to change these via regular controls in the Settings window UI.

There's one important caveat that I need to point out here. If you click on the pop-up with an update, that I showed above, and then click Install or Download to began installing or downloading updates, the GPOs that I listed here will not hold the update service from finishing up the installation and rebooting your system (in despite of the second GPO that I presented above.) So keep this in mind. In other words, don't touch those update pop-ups until you're actually ready to commit to it.

Well, it can't just work perfectly for everyone, can it? If you're on Windows 10 Home edition, your computer will not have the gpedit.msc console. Thus you can't do what I described above. 😢 "Thank you", Microsoft!

Rbmm and I looked into the implementation of the Update Service on Windows 10 Home in hopes of finding the System Registry keys that Microsoft uses to control installation of updates in that operating system. Here's what we found so far:

Hoping to find a definitive solution for the Windows 10 Home users to indefinitely delay updates upon their own choosing, Rbmm and I went on with our research. While doing it though, we accidentally stumbled upon a bug in one of the system libraries, that would allow anyone to gain local privilege escalation. Thus we had to put a hold on our current work, and to submit a bug report to Microsoft Security Response Center.

So when that gets resolved, we may look further into the workings of Windows 10 Home. But for now, I'm afraid to say that users of that OS will have to resort to some other third party solutions.

And if you're a software developer that wants to write a helper app that would delay Windows 10 Home updates or give control of that process to the user, you may look into the following folder in the Task Scheduler, that is used by the Windows Update Service to schedule all pending reboots:

If you intercept and re-schedule those tasks, this may be one way to accomplish this goal.